Home › Random Musings › Walk The Moon asked me to be their girlfriend.

Walk The Moon asked me to be their girlfriend.

No, seriously they did. Along with the rest of the crowd, BUT that is neither here nor there. WALK THE MOON last night was AMAZINGGGGG. Minus a super drunk girl who seemed to just want to dance on top of all my petite friends the crowd was great. People were a little pushy in the beginning but my 5 foot nothing roommate is the strongest most silent space holder I have ever seen. Her skills were pretty amazing.

WALK THE MOON has been around for 2ish year I believe? If you are interested in listening to some new songs my personal favorite is Jenny. I get super excited when it plays while I’m running. *Fun fact – I am a habitual Pandora user, I never use iTunes or download music at all. Last summer I purchased their album via iTunes and it remains the only music I have ever downloaded. Nifty right?

The opening band was called Pacific Air, there were good, nothing crazy special stood out about them but I enjoyed listening. I more enjoyed trying to figure out how that group of people were in a band together. The attire ranged from: a denim suit, beanie hat, blow out hair, and finally all the way to a guy in a cardigan that I swear Mr.Rogers would have been jealous of. It was quite the combination.

Then WALK THE MOON came on. The energy that these four guys bring to the stage is incredible. I am really glad I got the opportunity to see them again. When I saw them at Firefly it was after a heavy morning of drinking and napping on the lawn in front of the stage to make sure I got a good spot. Once I woke up to some tunes I was still what you could call “three sheets to the wind”, I am happy to report that they are just as good when you aren’t yammered! I didn’t get as good of a dance work out in but that is because I am saving myself for the rave fest I am going to tonight (it sounds exhausting doesn’t it?!).

Two more things of note – 1) The third picture, its all green, is exactly what you think it is. A DANCING CAT!!! With its own microphone! He was hanging out to the side of the drummer and at some points was dancing to the beat of the music! 2) The angle that the lead guitar player (Eli Maiman) was in front of us had me convinced that Robert Pattinson had joined WALK THE MOON. The entire show I was so confused as to why Eli was looking all Rob like, vampires can’t play guitar and rock can they?? I would rather Eli sing to me over Robert any day. Eli was incredibly close to us the entire show so my picture may be biased to him… The entire band did amazing and the INSANEEEEEE energy that Nicholas Petricca managed to keep up for the show was contagious. I love being up close and personal with bands and I feel like on top of taking on a new relationship (I said yes when they asked me to be their GF) I feel like these guys would be such cool dudes to be friends with. I’ll make sure to let them know when they call me for our first date. 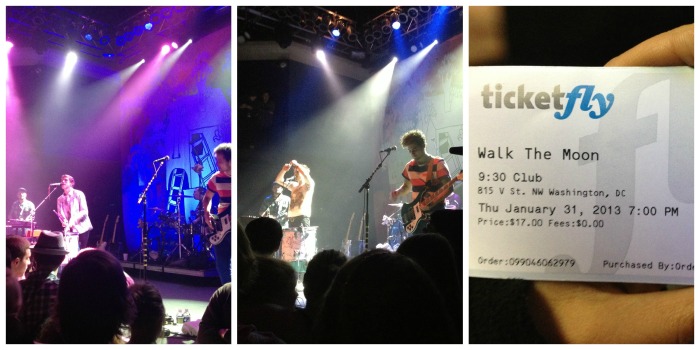 I hope you don’t mind but I’m going to continue this post for just a little bit more! I entered a giveaway on behalf of my roommate for some Choboni from Jon at Chasing The Top. When he let me know I won he told me that the Choboni would be arriving on the 31st, well guess what, last night was the 31st!! I don’t eat yogurt any more and have never been a huge fan of greek but after looking at all the flavors I’m a little jealous of the selection. Why can’t there be a paleo version of this stuff that I like… Oh wait there is… real fruit. I want to say thank you to Jon and Choboni because my fridge is super colorful right now and the roommate is going to have some stellar breakfasts and snacks since you sent them over. I also LOVE the packaging it came in. I wasn’t sure if I was getting Choboni or moon rocks.

Speaking of winning giveaways…I commented on a blog (skinnyrunner.com) on Monday that was about some natural health products and some how managed to get picked out of over 300 people! Crazy right? The goods that I won are from Onnit Labs and are called “Shroom Tech Sport” and “Hemp FORCE Protein”. I’m most excited about the protein powder, it appears to be paleo friendly so I am excited to start adding it to smoothies!

If you are jealous of all this winning going on in the Megan corner you should enter to win an AMRAP t-shirt from me!

Q: Have you ever won a giveaway on a blog? What did you win?
Q: How often do you enter giveaways?
Q: Any big plans / training sessions this weekend?
– I have a 12 mile run Sunday! This will be my new solo record!