After the brutal work out over lunch, it was decided that dinner needed to be something hearty and delicious. Going with the soup theme of the week we decided that it was time for the first batch of chicken noodle soup of the year!

In a large pot add some EVOO, chopped carrots, celery, and onion. Cook over medium heat for about 10 – 15 minutes, stirring frequently. Add in broth and season to taste. I am terrible as measuring spices so I shake until it looks like enough! Bring to a boil, cover, and reduce heat to low and let simmer for 25 minutes.

Meanwhile, cook noodles to a harder version of al dente – do not bother salting the water, broth is plenty salty! Go ahead and throw your chicken in a saute pan and cook to almost done. We seasoned the chicken with some poultry seasoning as well. I cut up the noodles into little wheels, do as you please with them though!

At the 25 minute mark add the chicken cubes into the soup. Allow to cook for 5 – 7 more minutes. When the time goes off use an immersion blender for a few minutes to shred the chicken and create a “creamier” soup – AKA we had some fabulous crusty baguette that was begging to be dipped!

Once it is mixed as much as you would like throw in the pasta and let everything cook for another 5 – 10 minutes. Serve!! 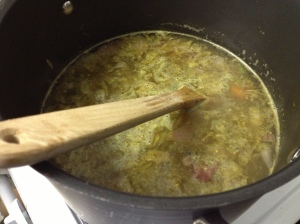 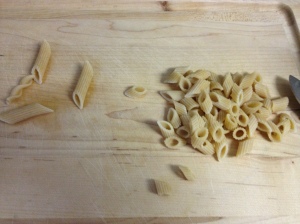 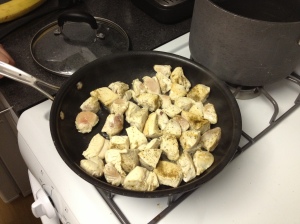 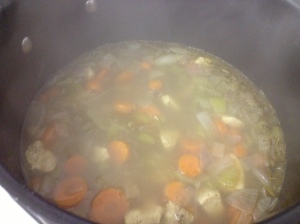 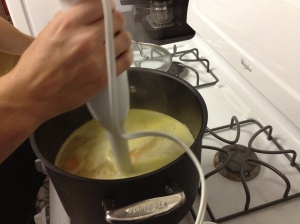 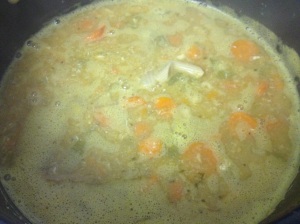 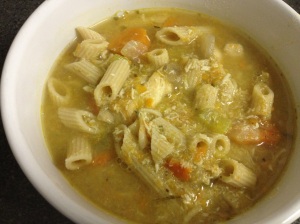