Still a happy girl! Did a bunch of random grazing during the day and made one of the more unattractive dishes I’ve ever come up with. It was really yummy though! The ingredients list will look incredibly similar to the salad I made last night, reason being I shop and cook for one, there are only so many ingredients a girl can buy and eat in a week!

In a non stick pan throw in some EVOO, once hot toss in mushrooms (quartered), asparagus (cut in half) and salt and pepper. Once those babies are pretty much done throw in the garlic, beans, corn and rice. My rice is the same stuff I made earlier this week so it was cold and needed to be heated up, plus I wanted every one dancing together. After about a minute throw in a some broth (1/4-1/2 cup? maybe more maybe less) and a healthy scoop of your mustard. Mix around and let simmer. In a small bowl add a tsp or 2 of corn starch to a tablespoon or two of chicken stock, mix well and toss in the skillet. Mix again, allow to bring to a boil and kill the heat. Now you may be thinking but Megan what about the spinach????!!! Well I am ashamed to say this but I put the spinach on my plate and microwaved it for 45 seconds…GASP I know… I wanted the spinach under this mess of nom and it was the only way I could think of to quickly wilt it. So spinach goes on plate, contents of pan on top and toss some fresh cut parsley on top and you get yourself maybe not the pretties meal but something that was super dooper quick, again cleaning out the fridge AND it was delicious. 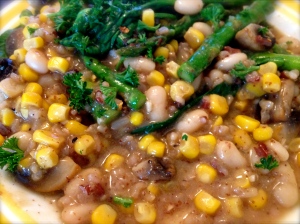 Side bar – took off the gym yesterday, will most likely run tonight before soccer. If not I’m not too concerned because soccer involved plenty of running. Again no female subs so lots of running for 90 minutes.

So when it comes to your food, if its not super pretty but super yummy does that bother you?